I’ve found information on two Mage orders in Gnomeregan, one a public work Guild and the other a secret society.

Their symbol is convoluted.  Something about an hourglass with objects orbiting around it, in circles, while concurrently the same objects pass through the hour glass in a straight line.  Who could make sense of that?

The Accelerants made use of a stylized graph indicating that alluded to controlled increases in power.

And the Hydrobinders used a depiction of some kind of Filter with pipes at the bottom.

I’m having the bibliotech at Gearshaft University added to the binary buzz box system.

Looks like their used to be Gnomish Orders.  The tinkers unions for Gnomish and Goblin engineering have survived, but a ton of groups have become obsolete.  I’ll be posting those as I get them translated.  Some of them have made it in some way to the modern world, there are others I can’t understand what they ever did.

Here are the first few.  They appear to be Warrior groups.

Teratrooper Infantry – These gnomes armed with sword and shield patrolled the natural tunnels that connect to Gnomeregan.  They were trained to stand together in tight formation and cut off narrow passages with their shields.  The Force Reactive Disk was invented by them for them with the intent to interlock and dig in to the walls of a tunnel.  This tradition has continued on in to the modern Gnomeregan Infantry.

They are represented as a bulwark guarding interlocking gears.

Sentry Committee – These gnomes guarded the surface of Gnomeregan.  They specialized in the larger weapons used by other races.  The idea apparently being that by using the largest weapons possible they would prove they were equally capable in martial ability.  Because of Gnomeregans narrow entrance, there were far fewer of these gnomes.  They were finally disbanded when the gnome monarchy ordered Gnomeregan sealed.

They are represented by three weapons with one handle.

The Pummelers – In the notes above there are references to another group called ‘The Pummelers’.  This appears to be a derogatory term for gnomes that did not have the discipline to operate in the tight groups of the Infantry, or the technical prowess of the Sentries.  These gnomes put more ’emotion’ in to their battles than any other.  There are records of some as champions.

They are represented by a large hammer made of loose bolts. (This seems to have originated as a derogatory image assigned TO the group that they later adopted.)

I need this to be a fair fight so I don’t get a bunch of belly aching whiners after the election.  That way I can TRULY prove my vast supreme-ness!  Bring it on Mekkatorque, you are going down once and for all!

Don’t be fooled by imitators. 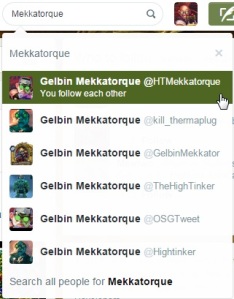 My main platform as candidate for High Tinker remains what it has ALWAYS been.  Manifest Destiny of the Gnomish Race across Azeroth.  It just makes sense.  No other group has the technical expertise of Gnomeregan.

Every sovereign nation on Azeroth could be made better with Gnomish Technology, and we should be present in all those places introducing and maintaining them for the smaller minded races.  If brains were height, gnomes would tower over all!  It’s time for gnomes to stand up and take their place in history!

I am aware that if I want gnomes to return to Gnomeregan I have to clean up the mess.  My plan is to ‘acquire’ the head of Gearmaster Mechazod and learn his de-cursive technique.  Once that has been mastered we can turn all my leper gnomes in to Mechagnomes.  Mechagnomes are not affected my the irradiation process.  Once the halls of Gnomeregan have been restored.  We use the re-cursive tool to turn the mechagnomes back in to fleshy gnomes.  That gets Gnomeregan Clean, AND cures the leprosy.

I don’t see Mekkatorque coming up with BRILLIANT plans like that!

It’s been a while since Mekkatorque has been challenged for his roll of High Tinker.  I think it’s about High TIME someone challenged him again!

I have put in a petition with the Tinker’s Council to allow Leper Gnomes to vote, so if that goes through I think I can win this!  I’ve been counting and Mekkatorque’s most recent “Operation; Gnomeregan” has tipped the number of gnomes to leper gnomes in my favor.

I’m bored and want to get violent!  Being added to Hearthstone was entertaining for a while, but honestly getting randomly sucked through Unstable Portals all the time is starting to get tiresome.  Trying to get ready for a shower, BAM battlefield.

At least the Nexus comes with interesting outfits.  I just KNOW they are going to pick Mekkatorque first.  That ALWAYS happens, BUT you can be sure as fel that I will be right on his heels!

You should be following @pommie_tappet ! She is a loyal member of the Gnomeregan Forces, and an excellent pet trainer.  Take her classes, hone your leadership skills, and then overrun the world with small robotic pets!

I’m beginning to experiment with Inscription.

I was going to try to make glyph that allowed Warlocks to Summon Mo’arg and Fel Reavers, but I’m not a warlock, so I didn’t know where to start.  I decided to go more basic and make glyphs for gnomes that all gnomes can use.

A letter addressed to the royal Queen-Regent of Ironforge Moira Thaurissan,

I am the King of Gnomeregan, the Mekgineer Sicco Thermaplugg.  I am sure you know me by reputation.  I had an agreement with your late husband.  I know that you are trying to work more with the Alliance and other Dwarven clans than he was, but I would appreciate it if we could meet and renegotiate the agreement Dagran and I had together.  I am sure you do not want to dishonor your late husbands memory by casting aside his allies.

I heard about what you did with Ambassador Slaghammer.  I never did like him.  He never had an eye for the future.

I will be awaiting your response,

P.S.  I do appreciate that you kicked Mekkatorque and his rabble out of you city.  I take it an a ‘good will’ gesture.